Composed of four international members and seven Canadians, the Centre’s Board of Directors is chaired by His Highness the Aga Khan. Click on each Board member’s image below to read their biographies.

His Highness the Aga Khan

His Highness the Aga Khan – Chairman

His Highness the Aga Khan is the 49th hereditary spiritual leader (Imam) of the Ismaili Muslims, and founder and Chairman of the Aga Khan Development Network (AKDN). Over the past 40 years the AKDN has grown to encompass development agencies, institutions and programs with mandates ranging from health and education to economic development and the revitalization of cultural heritage. All AKDN programmes are conducted without regard to the faith, origin or gender of the people they serve. The Aga Khan has emphasized the view of Islam as a thinking spiritual faith, one that teaches compassion and tolerance and that is inherently pluralistic.

Princess Zahra, the eldest child of His Highness the Aga Khan, heads the Social Welfare Department (SWD) located within the French Delegation of the Aga Khan Development Network. She has policy and management responsibility for the health, education, and planning and building services companies of the Aga Khan Development Network (AKDN). She also plays a key role in policy and strategy matters relating to the other social development institutions of the Network. She is a member of the Board of Trustees of the Aga Khan University and works with institutions supported by the Ismaili Muslim community in the areas of social welfare, women’s activities and youth programs.

Ms. Bárcena Ibarra is a Mexican biologist who was, until recently, the Executive Secretary of the United Nations Economic Commission for Latin America and the Caribbean (ECLAC). She has acted as Coordinator of the United Nations Environment Programme (UNEP), in charge of a global programme on environmental citizenship with emphasis on the participation of civil society.  She served as Acting Chef de Cabinet in the Executive Office of the Secretary-General under H.E. Kofi Annan in 2006. On 3 January 2007, Secretary-General Ban Ki-moon appointed Bárcena as UN Under-Secretary-General for Management.

Ms. Bárcena previously served as Co-ordinator of the Latin American and Caribbean Sustainable Development Programme of the United Nations Development Programme (UNDP), responsible for the Environmental Citizenship Project at the United Nations Environment Programme (UNEP).  She was the Founding Director of the Earth Council in Costa Rica, a non-governmental organization in charge of follow-up to the agreements reached at the UN Conference on Environment and Development (UNCED) held in Rio de Janeiro, Brazil, in 1992.  Ms. Bárcena has published numerous articles on sustainable development, public policy, environmental issues, and public participation. She has been awarded several honoris causa doctorates and has received the medal 2013 in International Relations of the University of Anáhuac.

The Rt. Hon. Adrienne Clarkson, PC, CC, CMM, COM, CD, was Canada’s 26th Governor General from 1999-2005. She was the first person not born in Canada to be named to this post. In 1942 she and her family came to Canada from Hong Kong as refugees of the Second World War. She has had an impressive career in the arts as a journalist, novelist, publisher, public servant and television personality, and has received numerous honorary degrees. Her interest in Canada’s North framed much of her tenure as Governor General as she attempted to forge stronger ties between Canada and northern aboriginal people. Since her time in office she has published an autobiography, Heart Matters, and co-founded the Institute for Canadian Citizenship (ICC) with her husband, the author and scholar John Ralston Saul.

An Ojibway from the Animakee Wa Zhing 37 First Nation, Mike DeGagné serves as the President & CEO of Indspire, an Indigenous charity investing in education for Indigenous populations across Canada. M. DeGagné holds a PhD from Michigan State University, focussing on Indigenous post-secondary success, and Master’s degrees in administration, Law, and Public Ethics. Mr. DeGagné is a recipient of the Order of Canada and the Order of Ontario as well as the Queen’s Diamond Jubilee Medal. Most recently, he received an Indspire Award for Public Service, was inducted into the Nipissing District Human Rights Hall of Fame, and received an Honorary Doctorate of Law from Dalhousie University.

He was appointed Nipissing University President and Vice Chancellor in 2013, becoming one of the first Indigenous presidents of a Canadian public university. While President of Nipissing, Mr. DeGagné dedicated much of his work to Indigenous issues and ensuring that Nipissing University took a leading role in the indigenization of the post-secondary education sector. He later served as the first President of Yukon University, a new hybrid post-secondary institution in Whitehorse, Yukon. During this time, he managed its transition to a university. His career also includes working with the federal government in management of Indigenous programs and as a negotiator of comprehensive land claims.

The Right Honourable Beverley McLachlin PC, CC, CStJ, FCIArb, served as Chief Justice of Canada from 2000 to 2017. She is the first and only woman to be Chief Justice of Canada and was also Canada’s longest serving Chief Justice, building experience and skill in leading and consensus-building for many years as the head of a diverse nine-member court.
Throughout her judicial career, Ms. McLachlin has been involved with countless areas of the Canadian legal system, both common law and civil law, and both private and public law, in English and French. In 2018 Ms. McLachlin was appointed to the Order of Canada as a recipient of its highest accolade, Companion of the Order of Canada. She has received over 35 honorary degrees from universities in Canada and abroad, and numerous other honours and awards. She holds a B.A (Honours) in Philosophy, and M.A in Philosophy and an LL.B from the University of Alberta.
Ms. McLachlin is a Member Arbitrator at Arbitration Place and works as an arbitrator and mediator in Canada and internationally. She sits as a Justice of Singapore’s International Commercial Court and the Hong Kong Final Court of Appeal.

James Irungu Mwangi is the Executive Director of the Dalberg Group, a collection of impact-driven businesses that seek to champion inclusive and sustainable models around the world. Mr. Mwangi leads integration and innovation across Dalberg’s five core businesses, which together employ over 600 staff in 25 locations across the globe, including 11 countries in Africa. He launched Dalberg’s presence in Africa in 2007, and previously served as Global Managing Partner of Dalberg Advisors from 2010 to 2014. He currently serves on the boards of Old Mutual, The Skoll Foundation and One Acre Fund. He holds an honors degree in Economics from Harvard University, was previously with McKinsey & Company, and is a Archbishop Tutu Leadership Fellow (2009), a Young Global Leader of the World Economic Forum (2013), and a member of the Young Presidents’ Organization.

Azim Nanji is currently Special Advisor to the Provost, Aga Khan University. He has served most recently as Senior Associate Director of the Abbasi Program in Islamic Studies at Stanford University, where he also lectured in the Department of Religious Studies. Previously he was Professor and Chair, Department of Religion, University of Florida (1989-1998), and Director of the Institute of Ismaili Studies, London (1998-2008). Born in Kenya, he is a graduate of Makerere University and obtained his Ph.D. from McGill University. He is the recipient of awards from the Rockefeller Foundation, the Canada Council, and the National Endowment for Humanities. Dr. Nanji has authored, co-authored and edited several books, including The Penguin Historical Dictionary of Islam (2008).

Marty Natalegawa served as Foreign Minister of the Republic of Indonesia between 2009 and 2014. He also served as Permanent Representative of Indonesia to the UN in New York (2007-2009), coinciding with Indonesia’s membership of the Security Council. He currently serves as a member of the United Nations Secretary-General’s High Level Advisory Board on Mediation. He also serves as Asia Society Policy Institute Distinguished Fellow; as a member of the International Academic Advisory Board of the Centre for Strategic and International Studies (CSIS-Washington, D.C.); International Crisis Group Board of Trustees; Global Advisory Committee of the Jeju Forum; UWA Public Policy Institute Advisory Board and is a Prominent Research Scholar of the Bank of Indonesia Institute of the Central Bank. He earned a Doctor of Philosophy (D.Phil.) degree from the Australian National University in 1993.

Margaret Ogilvie is Professor of Law and Chancellor’s Professor at Carleton University, Ottawa, and a member of the Bars of Ontario and Nova Scotia. She is a Fellow of the Royal Society of Canada (1993) and a recipient of the David W. Mundell Medal (1996) for legal scholarship, the Law Society Medal (2001) from the Law Society of Upper Canada, and holds two honorary doctorates in recognition of her contributions to the legal profession, both in Canada and abroad. She has been a visiting scholar at the Universities of Edinburgh, Emory, Oxford and Toronto, and twice at the Princeton Theological Seminary. She is the author of 14 books and over 200 law review articles on religious institutions law, banking law and contract law primarily. She has served on several boards in the not-for-profit sector in Canada. In 2008 she was invested into the Order of Ontario in recognition of her lifelong achievements as an educator and legal scholar. She was awarded the Queen Elizabeth II Diamond Jubilee Medal in 2012.

The Chair, Directors of the Board and staff of the Global Centre for Pluralism are deeply saddened at the death of Kofi Annan who, in addition to his many great contributions to humanity, was a leading member of the Centre’s Board of Directors since its inception in 2010. 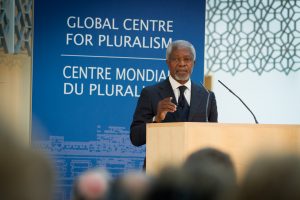